Juicing: Here's What YOU Say About It!

Last week, I participated in a lively and interesting conversation about juicing (and smoothies too!).
The UK Guardian hosted the live webchat and you responded. En masse. In fact, the organizers tell me that there were many many questions that we just didn't have time to get around to answering.

Take a look at the comments, the questions, my answers and the results of the three surveys that were taken during the one hour we were engaged. Click HERE

If you have a juicing question, ask me in the comment section below and I will answer it. 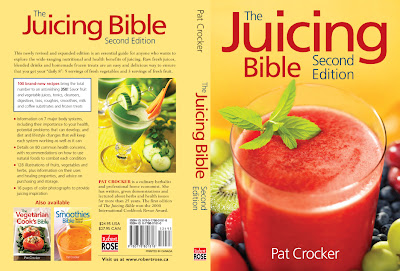 Speak Out Against Genetically Modified Alfalfa

It's time to show your green. Send a letter to The Honourable Gerry Ritz, Minister of Agriculture and Agri-Food- Here's my letter, sent today.
Go here and learn more about GM Alfalfa and your food.

I am writing to ask you to take urgent action to stop the registration and
commercial introduction of genetically modified (GM) alfalfa in Canada.

GM alfalfa threatens the markets for all alfalfa growers as well as the
future of organic food and farming in Canada.

The introduction of Monsanto’s GM herbicide tolerant (Roundup Ready)
alfalfa would have serious negative impacts on many different types of
farmers and farming systems, both conventional and organic. Conventional
and organic farmers agree that GM alfalfa is not wanted or needed

Because alfalfa is a perennial crop pollinated by bees, GM contamination is
inevitable.

GM alfalfa was approved in Canada in 2005 but still needs variety
registration before it can be legally sold as seed. Please take immediate
action to stop GM alfalfa before it contaminates farmers' fields and my
food.

Thank you for your attention to this urgent matter.

I look forward to your response.


Cleansing tonics are an ancient rite of spring that reflects the season's central theme of self-renewal. By definition, a tonic is an infusion of herbs that invigorates or strengthens the system. In addition, tonics often act as stimulants and alteratives as well. Taken either hot or cold, tonics restore tone, purify the blood, and act as nutritive builders.

Throughout history, and even as late as the 20th century, herbs and herbal spring tonics have been used by North Americans and Europeans to cleanse the system after a long winter of eating preserved meats with little or no fresh fruits or vegetables. The six-week fasting and abstinence period of Lent, apart from its spiritual significance, had a practical effect of helping the body prepare for the shock of astringent spring greens.

This Just In From Organic Consumers Assn

Basil at 2 months from seed.

First harvest and I clipped off most of the tips. I combined it with my CSA basil and made my first batch of pesto.

Basil at 1 month from seed

Any seeds lucky enough to have room to grow are now at about 2 inches high. Not yet time to harvest.

I'm too soft to thin my basil. This wheel of basil was sown on Mother's Day, May 18th this year. Please come back to Watch It Grow.

What is an herb?

My definition of 'herb' is: any plant that is helpful to humans. Plants that are used in culinary, medicinal, ornamental and cosmetic preparations are largely categorized [by me, anyway] as herbs. That means that some trees, shrubs, spices, woody plants, fruits and vegetables fall into my broad definition of 'herb'.
And that is why on my blog, you will find a wide variety of plants used in my original recipes. 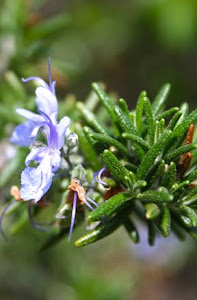 It's not exactly an herb–it is fungi! The photo is dried Porcini. I reconstitute it for risotto or soup. 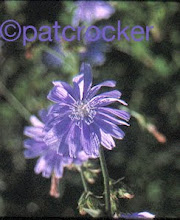 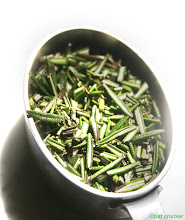 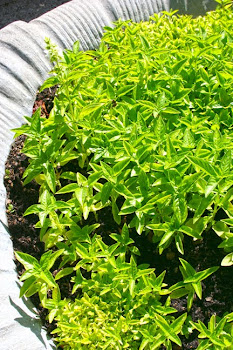 July 26: The lonely guy! One short basil stem sports a flowerhead (see close-up on the left). Not thinning has caused overcrowding and stunted growth.

June 26: Most seedlings have now past the 2-leaf stage, but they are crowing each other out.

Watch It Grow. See close-up on the left. This wheel of basil was sown on Mother's Day, May 18th this year. Please come back to Watch It Grow.


Cooking Book Review: The Juicing Bible by Pat... by CookBookMix

Robert Rose publishes many of Pat's books. Check out her biography here.

Read all about how yogurt connects to the health/local/green/global trend. click here and see my latest book.

Nettie on Being Flexitarian

Nettie Cronish, my co-author explains the concepts behind 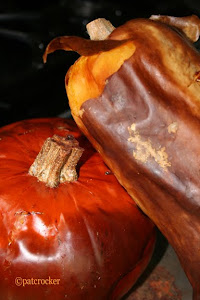 Roast 'Em for Flavour! Place whole squash (I used a small pie pumpkin and a butternut squash) on a rimmed baking sheet. Prick in several places with a knife. Bake in a 350° oven for 1 hour or until tender when pierced with a knife.

pat crocker
Neustadt, Southern Ontario, Canada
I'm a Culinary Herbalist and cookbook author (13 books including 3 herb handbooks) I create, develop, test and photograph recipes. Food and Herbs are my passion. For a listing of all my cookbooks and to order, go to my webpage: www.patcrocker.com

E-mail me:- my web page, click on my e-mail address right under my name at the top of the home page.
Or just use my address:- pcrocker@riversongherbals.com

Check out The Herb Companion

Gardening, recipes, health tips...everything you need/want to know about herbs. it's all in this cool magazine. 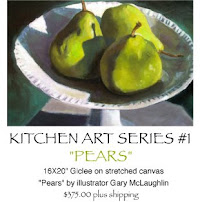